That tells us that we have $7 left.

The golden rule of describing a situation using integers is to think about whether you are increasing or decreasing a value. If you are increasing, then the function should be addition (+); if you are decreasing then the function should be subtraction (-). Another way to think about it is whether a number is 'going up' (addition) or 'going down' (subtraction).

For example, if we are told that a farmer has 15 sheep, and sells 3, we know that the number of sheep he owns is decreasing. Therefore, we are dealing with subtraction. To create the equation, we'd write the following:

In this case, that would be:

Another example: John gets paid 20tocleanhisneighbor′scar.Whenhehasfinished,theneighborgiveshimanextra5 for doing such a good job.

We know that John's final total has increased, so we have to use addition.

So we can use the following:

In this case, that would be: 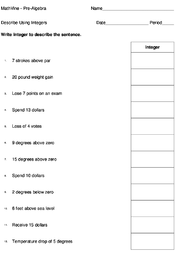 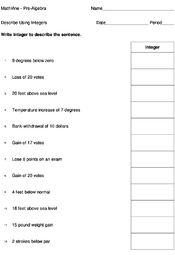